The 5 Most Common Causes For Filing For Bankruptcy

There are many reasons why clients file for bankruptcy, and most of them are the result of things outside of their own control.  In this article we discuss five of the most common causes for a bankruptcy filing.

More than 60% of all Chapter 7 and Chapter 13 bankruptcy filings are the result of unpaid medical bills resulting from either a longterm injury or an unexpected disaster - a heart attack, stroke, or an uninsured accident.  Interestingly, more than 70% of those filers had some form of health insurance, so, simply having insurance is not enough.  Co-pays, uncovred costs, can be devastating to families and drive them to becoming insolvent.

Government studies show that an overwhelmingly large segment of our population lives paycheck to paycheck, meaning that, essentially, they just cover their bills when all things are operating they way they are supposed to - working everyday that they can, working hard, and barely scraping by.

But when you live paycheck to paycheck, a job loss can be devastating.  Even with unemployment insurance, the loss of a job can cause debt to grow, and, wen paying credit card debt incurred while trying to satisfy basic needs, the burden grows like a snowball during a blizzard.  Within a few months, the burden is so great, that there isn't any reasonable way of catching up.  Overwhelmed with pride and a sense of obligation, hard working people who have been injured by the loss of a job, are often too slow or unwilling to consider bankruptcy as an option - but it may be their best option.  By the time they see a lawyer, its often their only option. 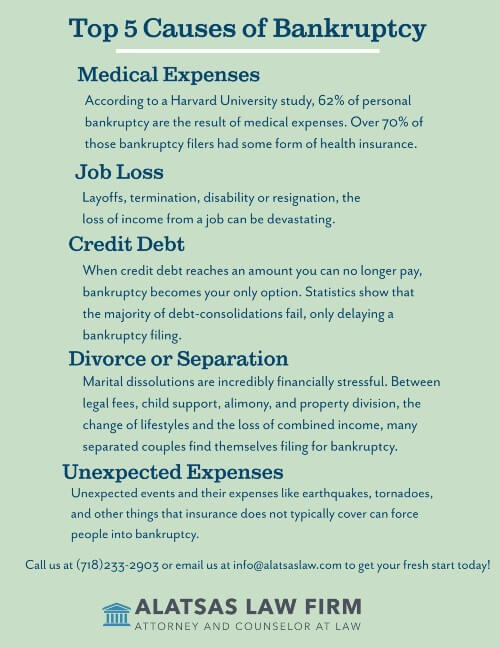 Everyone has at least one, but some people carry multiple cards, and often with significant balances.  These balances often carrying interest rates in excess of 20%, so the average credit card debt can take a decade to payoff, if they only pay the minimum payment.  Carrying these high balances can make it difficult to make ends meet, but budgeting requires sacrifices that are often hard to make.

Carrying credit card debt is also one of those things that can result from either of the 4 remaining causes outlined in this article - an unexpected medical expense, legal fees for a divorce, paying for food when you lose a job - all can contribute to this debt load.  When the debt load grows to big, filing a Chapter 7 or Chapter 13 bankruptcy may be the only choice to get out from under.

Let's face it, divorces can be expensive, not merely because you take one income and now have to support two households, but because you have lawyers' fees, court costs, experts, and other expenses related to the divorce process.  This applies both in Contested or Uncontested divorces.  There are a number of mistakes people make while going through a divorce, but, even if you do everything right, there are costs associated with it, and failing to budget properly can lead to devastating financial costs.  That is why divorce is a leading cause of bankruptcy filing.

There are things you can't plan for - tornadoes, Superstorm Sandy, earthquakes, disability, and a whole host of other disasters that aren't covered by insurance.  These types of disasters can not only devastate families emotionally, destroy homes, uproot lives, but can also cause financial ruin.  That's why there is always a ride in bankruptcy filings in areas hit by hurricanes, or mudslides, or, like we faced in New York in 2012 after superstorm Sandy.  When the government can't fill in the gap through Federal Emergency Management Agency (FEMA) grants or Small Business Administration (SBA) loans, affected people may have no other choice but to seek the protection of a Chapter 7 or Chapter 13 bankruptcy filing.  And now, with COVID-19 having shutdown so much of our economy, bankruptcy filings are predictably on the rise, and the number of people on the verge of bankrupty grows every day.