Who Gets to Keep the Wedding and Engagement Rings After a Breakup or Divorce? 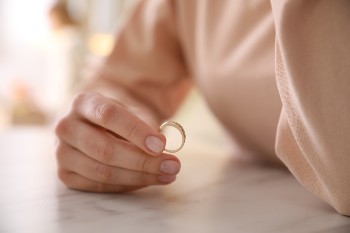 Besides acting as a symbol of your relationship, an engagement or wedding ring can represent a significant financial investment. You may want to sell it if you are struggling financially after a breakup. When you add in emotional considerations, like a desire to see an heirloom pass through generations of a family, it’s not surprising there may be a dispute about who gets the ring after a divorce. Exactly who is allowed to keep the ring when a romantic relationship ends depends on both how and when it was given as our Brooklyn divorce attorney explains.

Determining Who the Ring Belongs to After a NY Divorce

It isn’t uncommon for emotions to run high during a divorce. One party may feel they were wronged and deserve to keep more of the assets in a divorce, like an expensive ring. Although you may have completely valid reasons for ending the marriage, the bad behavior of your soon-to-be ex isn’t a consideration in a dispute over the wedding or engagement ring.

Fault for the divorce simply isn’t a factor in this particular situation, even if the other person was cheating, abusive, or neglected the children. Instead, dividing up property like wedding rings is a strictly legal concern, and there are clear rules on how the situation should be handled when a marriage dissolves.

Here’s what you need to know about whether the wedding ring belongs to you or the other party:

To avoid further problems during your divorce, it’s important to determine who this crucial piece of the marriage actually belongs to before doing anything with the ring. If it legally belongs to you as separate property because the condition of marriage was met, you are free to sell the asset for the financial help, keep it to re-use at a later time, or even give it away.

Of course, the ring is just one in a long line of potential sticking points during a divorce. It’s all-too-easy for the situation to get messy quickly if you don’t have a neutral third party to help with negotiations. That’s why you need to talk with an experienced attorney early in the process. A lawyer with experience in New York divorce cases can help ensure your legal rights are protected while dividing up assets that may have sentimental or financial value, from family heirlooms to the house and car.